Some bits and pieces about and from my book Putins folk (Putin’s people), published in 2014 in Swedish, Finnish and Esperanto. Translation from Esperanto by Trevor Steele. My second book, Krim tillhör oss (Crimea is ours), is being published in the same languages on March 18, 2015. And who am I?

…a continuously fascinating book, a report that increases our understanding of Russia and the Russians. / … / It is a magnificent journalistic achievement to succeed with the task Kniivilä undertakes – to describe a complex reality without passing judgment. That task is left to the reader. I thank him for that.
Ann Heberlein, Dagens Nyheter, Sweden

It is a brilliant report. Usually one learns more by listening to those who do not share one’s world view than the other way around. / … / There is one extremely serious deficiency in Kalle Kniiviläs book: it is his first. This well-written and conscientious reportage makes you realize what services he could have done for the Swedish debate on Russia, had he published a little more often.
Martin Aagård, Aftonbladet, Sweden

There exists, both in the West and in Russia, a tradition of exoticizing Russia, to the effect that the country would be particularly difficult to understand. You can find it in Churchill’s winged words ”A riddle wrapped in a mystery,” and in Tyutchev’s  ”Who would grasp Russia with the mind”. In ”Putin’s people” Russia and the Russians become understandable, many of us would act the same way as they do if we were in the same situation. / … / Putin’s people is the best Swedish book on Russia for many years.
David Isaksson, Helsingborgs Dagblad, Sweden

In his new book ”Putin’s people – the silent majority of Russia” the Swedish journalist Kalle Kniivilä keeps two thoughts in his mind at the same time. Yes, it is true that the television in Russia shows the Russians what Putin wants them to see, and that the elections are characterized by cheating, but it is nevertheless a fact that Putin currently has solid support from a majority of Russians. It is this silent majority he lets speak in his reportage from Russia. /…./  Probably / … / the most important book about Russia published in a Scandinavian language this year. Kniivilä manages a difficult balancing act to show what Putin and his regime mean for ordinary Russians without becoming a Putin apologist, and gives us a solid tool to understanding contemporary Russia throughout its enormous width.
Martin Paulsen, Morgenbladet, Norway

Kniivilä’s book is one of the absolute champions of its kind. It is written very well and it gives answers to anybody who is capable and non-biased enough to accept the fact that the world can be seen in more than one way, and that a differing world view doesn’t make one morally or intellectually deficient.
Timo Vihavainen, Kanava, Finland

A man of the people

Note by the Author

I grew up in the most easterly part of Finland, and as a child I sometimes wondered what was on the other side of the border, where the world seemed to come to an end. At one place the road from Helsinki passed so close that tall watchtowers could be seen, and that was all. If you turned your radio to middle wave you heard mostly Russian. On the shortwaves you could clearly hear the Finnish broadcasts from the BBC in London.
When the program finished it was time for the Russian language broadcast, but thirty seconds later the Soviet jamming was switched on and everything was drowned in a cacophony – not that I would in any case have understood anything.
During the class trip of our sixth school year to Leningrad in 1978 we saw that behind the border there was a different reality. Two years later I started to study Russian, I even took part in a language camp to meet for the first time somebody from the other side of the border. But the Soviet student sdid not receive permission to exit their country.
I continued my study of the Russian language and the social structure of eastern Europe at the University of Lund in Sweden, and after an autumn semester at the University of Leningrad in 1989 I could not only speak Russian fluently, but as well I had some practical experience of how Soviet society functioned.
The collapse of the Soviet Union I experienced at close hand as the Moscow correspondent of the leftwing Finnish journal Kansan Uutiset in 1991and 1992. Since then the development of technology has made it more and more easy to follow events even from a distance, and in recent years as a journalist of the south Swedish newspaper Sydsvenskan I have had the chance to undertake several journalistic trips in Russia and other former Soviet republics. 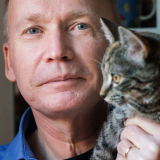